To plant Water Chestnuts, research them now so you will have time to think about growing some after winter.

Most of us would have seen tins of Water Chestnuts in the Asian Supermarkets of the Asian food section of our local supermarket.  Those ones are fine but they taste even better when they are fresh.

The Chinese Water Chestnut (Eleocharis dulcis) is part of the Cyperaceae family, a sedge, which look like grasses and rushes, some grow in wet areas and some 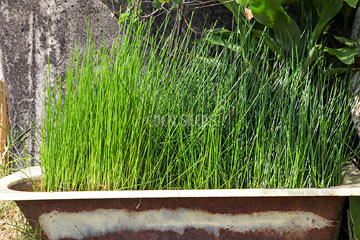 prefer poor soil, some common members of this family you may know are papyrus and nut grass.  In Cantonese it is known as ‘Matai’ which translates as ‘horses hoof’, there is some resemblance.  It is native to topical and temperate areas of East Asia, the pacific island, Madagascar and West Africa.  There is also a native Australian variety which is found in the Northern Territory, which when given to the explorer Leichardt by the Aborigines said “it was the tastiest native food offered to him by the Aboriginals”.  In its natural environments it would be found growing in marshy areas and on the edges of water ways.  In the home garden this environment can be achieved by digging a pond or with some creative recycling.  Suitable containers could include barrels, wading pools, cut down 44 gallon drums, old laundry or bath tubs, have you got the idea.  I’m sure you can find something suitable.

The edible part of a water chestnut is the corm which grows below the waterlogged soil.  To prepare a container for planting put about 20cm sand, soil or potting mix which has been enriched with well rotted down manure, some garden lime/dolomite and blood and bone (the preferred pH is between 6.5 and 7.0).  Bruce grows his water chestnuts in cracker dust with added sand, zeolite, seaweed and granular diatomaceous earth.  Fill the container with water so it is a few centimetres above soil level and allow it to soak well for a few days.  Drain off the excess water and allow it to sit for a couple of weeks so the manure and fertilisers have time to breakdown a bit.  In ideal growing conditions one corm will multiply to 100 in a good growing season, some sources recommend in a square metre you should plant 1 corm others 2 some say plant them 30cm apart, I would go with 3 or 4 per square metre.  Plant corms about 10cm deep in the soil, keep the soil moist but not submerged until their shoots are about 20 – 25 cm high, then fill with water to about 10cm above soil level.  This water level should be maintained until the corms are ready to harvest.  It takes about 8 months from planting until harvest.  When the weather starts to cool in Autumn the leaves of the water chestnut will start to go yellow, which means they are almost ready to be harvested, drain off/remove the water leaving the corms in the wet soil for another month until the shoots die back and are straw coloured.  If you don’t want to harvest them at this time remove the dead leaves and the corms can be left under the soil for the cooler months (a few cold nights will sweeten them) but come spring they will start to shoot again.  In containers harvest the corms by hand to avoid damaging their delicate skins, the corms will usually be in the top 10cm of the soil.

Water chestnuts are shaped like a gladioli bulb with a shiny dark brown/black skin and between 3 and 5 in diameter.  They should be thoroughly washed then peeled by first cutting off the top and bottom and then peeling the remaining skin, this can be easily peeled with your fingers to reveal a crisp white flesh, which can be 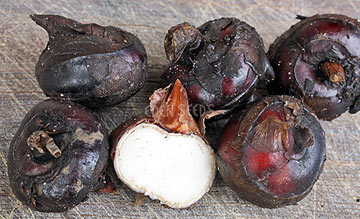 eaten raw or cooked.  Raw water chestnuts are usually sweet and have a nutty flavour and their flavour has been likened to coconut, apple and macadamia nuts.  Even when they are cooked they will retain their crispness.  They are a common ingredient cooked in many Chinese and Japanese dishes and also go well raw in salads.  They can be added to stew, soup, curry, stir fries and almost anything.  The Chinese dry and grind them into a flour which is used in several Chinese dishes and also to make a water chestnut cake.  They can also be picked.  In some parts of Asia they make a drink by either blending raw chestnuts in water or boiling them or their skins in water for 15 to 30 minutes and adding a little extra palm sugar to enhance the flavour.  The drink tasted like water that has had sweet corn boiled in it and it is reputed to have cooling properties, popular on hot days in Asian cities.  Canned ones are okay to use but the fresh ones are by far superior.

Medicinally they are said to be helpful for coughs, measles, jaundice, urinary infections, fevers, diarrhoea, indigestion, sore throats, and diabetes, hypertension and mouth ulcers.  Eating too many of them can cause gassy stomachs and bloating and pregnant women should avoid them.

They are generally free from pest problems but ducks and geese will dig up and eat the corms if they are given the opportunity.  Water rats also like them.  Do not allow them to escape into our waterways as they could become a pest.  As the water chestnut is grown in stagnant water in our warmed months mosquitoes may be attracted to the water to lay their eggs.  Some suggested ways to avoid this are to add some small fish to the container or make a frame over your container and put mosquito netting over it.  Bruce Ham moves a striped marsh frog into the pond and the problem is soon resolved.

A water feature is supposed to be good feng shui, so make yours an edible water garden this coming spring and plant some water chestnuts in it.  It is also a project young children might like to help with.

Divide broccoli into small sprigs, trimming off all but the most tender stems.  Bring a small pan of lightly salted water to the boil, drop in the broccoli and return to the boil for 1 minute. Drain, and then plunge into cold water to stop cooking and to set the colour.  Wash bean sprouts in cold water and drain in colander.  Peel, wash and slice water chestnuts.

Mix together oils, soy sauce and sugar in a container with lid and shake to mix well and dissolve sugar.  Toss together vegetables and dressing in bowl and serve.

Peel prawns and chop.  Soak mushrooms in hot water for 20 minutes then slice off and discard stems, chop mushroom caps.  Chop bamboo shoots.  Combine all the chopped ingredients with the pork, sale, soy sauce, wine, sesame oil and egg white.  Mix well together and place 1 heaped teaspoon of mixture in the centre of each wonton wrapper.  Gather the wrapper around the filling and press it closed to give the shape of a little money bag.  Lightly oil a steamer and place Dim Sims in a single layer on the perforated tray.  Cover tightly and steam over boiling water for 20 minutes.  Serve hot or cold with your preferred dipping sauce.

Share this article
Posted in: BOGI
Tagged with: Water Chestnuts
Back to top