Another Great Spinach for Our Summers – Egyptian Spinach

Egyptian Spinach, Corchorus olitorius, is becoming very popular as a summer vegetable in our part of the world. It goes under many names Molokhia/Molokheiya (and several other ways of spelling it), salad mallow, Jew's mallow, jute mallow and West African sorrel to name but a few. It is thought to have originated in Egypt well before the time of Christ and has been a staple food there since the time of the Pharaohs. The Egyptian name molokheiya means ‘vegetable for the king’, according to Wikipedia a sick Egyptian king, around 6000BC asked for hot soup when he was unwell and after taking the hot soup every day his illness was cured. Cleopatra is also said to have enjoyed the same soup. Egyptian Spinach and its many close relations grow throughout Africa, the Middle East, India and many parts of Asia. It will grow in most tropical and sub tropical regions throughout the world.

It is grown as an annual, grows to about a metre tall, gets small yellow flowers, produces edible seed pods and edible leaves that can be continually harvested. It is very hardy and fast growing. As a close relation to okra many of the same growing conditions apply, loves the heat, can handle both dry and wet conditions (not waterlogged) but doesn’t like the shade. 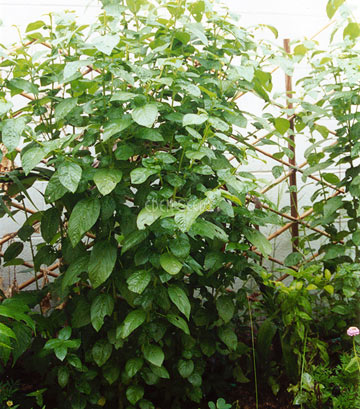 Do you want to grow some? It will grow in all soil types and is not particular about the pH but of course prefers a fertile moist soil. It will even do well in pots. Prepare your soil in your normal way then plant seed directly where they will grow, the best planting time is between spring and autumn. Egyptian spinach seeds will germinate better if they are soaked in hot water before planting for at least a few minutes, Isabel Shipard recommends soaking for up to 12 hours. Start picking leaves when the plant is about 40cm high. Seeds which mature on the plant and drop to the ground will lay dormant in the soil until the weather is right and become next year’s crop. Egyptian spinach is fairly disease and pest free. Caterpillars and grasshoppers will share the leaves with you and in the heat of summer they can be affected by red spider mites but overall not too problematical. Seeds are currently available from BOGI seeds.

The leaves are very high in protein, minerals and vitamins. Younger leaves can be eaten raw in salads, on sandwiches and the older leaves cooked or dried. Use leaves as you would spinach. In Egypt the leaves are used in a traditional soup with garlic, coriander and meat, in other areas it is made into a stew with cassava, rice and chicken meat. There are many recipes available for this vegetable. Leaves can be dried then powdered and used as a tea, stored for future use in soups and stews for added flavour and as a thickener . In Japan it is marketed through health food stores as a healthy tea. Young seed pods can be used the same way as okra.

The health benefits of Egyptian spinach have been promoted since the time of the Pharaohs. As a tea it will boost your immune system and is also said to be helpful for treating anaemia, cancer, constipation, cystitis, diabetes, fatigue, high blood pressure, high cholesterol, menopausal symptoms, obesity, respiratory problems and water retention. Tea made from the leaves is said to aid in child birth and increase milk production for mothers. It can also be used a wash for sore eyes, rashes, cuts and abrasions.

Many members of the Corchorus genus are grown as a source of jute as they have long, strong fibres in their stalks. Over the centuries this jute was used to make a coarse yarn which was then made into rope and a coarse sacking fabric. The tallest, unbranched stems were best for this. Stems would be soaked for several days so the vegetable matter would rot and the fibres easily removed then washed, dried and sorted for use. This fibre is also used to make paper in some areas. Corchorus olitorius or Egyptian spinach is best used as a leaf vegetable while some of its other relatives are better used for jute production.

Wash the meat, remove any inedible parts and dry. Place into large pot with onion, bay leaves, cardamom pods, salt and pepper, cover with water and bring to boil. Simmer until meat is cooked, don't overcook.

Remove meat, drain, brush with butter or oil, place on baking tray in hot oven and roast until golden.

While meat is roasting - strain broth meat was cooked in and return broth to pot. Melt butter in pan add crushed garlic, coriander and sauté until golden add lemon juice then mix into broth, bring to boil and simmer for 5 minutes. Add salt and pepper to taste. Add molokhia and boil until just cooked (3 – 5 minutes).

Remove meat from oven, cut into 6 – 8 pieces. Serve either mixed into broth or beside it.

Share this article
Posted in: BOGI
Tagged with: egyptian spinach
Back to top