Colour My World With Zinnia

Plants which add colour to our gardens can vary throughout the year, one that does better in the hotter part of the year is the Zinnia. The Zinnia is an annual, part of the Asteraceae family, varieties of which are native from the American Southwest to South America, but were primarily found in Mexico where the Aztecs referred to them as ‘mal de ojos’ (hard on the eyes) because of their bright flowers. They got their name from German botanist Johann Gottfried Zinn, (a botany professor at Gottingen University during the 18th century) who wrote the first scientific description of the flower.

Plant varieties are available from dwarf to tall, with flowers ranging from a centimetre or two in diameter up to the size of a dinner plate, single or double, pompoms, even cactus type flowers in a wide range of colours from lavender, orange, pink, purple, red, white, yellow, even green and variations in between.

Zinnias will grow in a variety of soils but do best with well drained soil (pH 6 - 7) and full sun. Prepare garden beds with plenty of organic matter (compost and manures), soil to be kept moist but not wet. While mainly grown in the garden bed they can be grown successfully in containers. Seeds can be planted directly into the garden bed or into seed trays. Several varieties are also available as seedlings.

Zinnia elegans – probably the most commonly known zinnia which grows as a bushy plant to about 80cm high with flowers (single coloured and multicoloured) from button sized up to 15cm across on long stems – California Giant, Dahlia Flowered Gold Medal Mix, Lilliput Mix, Sprite Mixed, Thumbelina and many more. 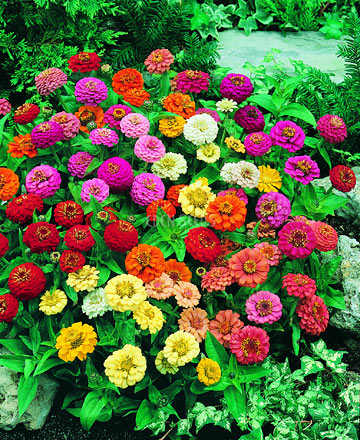 Liquid fertilise during their early growth then once or twice a month after they begin flowering. Pinch the tops off the plants when they are about 15cm tall to help plants grow bushy and encourage branching. Dead head regularly to encourage more flowers. They will attract butterflies and other beneficial insects to the garden, make great cut flowers which will last a week or more and even make colourful dried flowers.

Zinnias are susceptible to powdery mildew, rust and blackspot, to help avoid this allow space between plants so as to allow plenty of air circulation. Keep foliage dry, gently shake plants to remove water drops after watering and rain. These fungal problems can be treated with Baking Soda Spay (recipe on Page 10). If mites or aphids attack your zinnias treat with a Soap Spray.

It is easy to save seeds from zinnias but they will cross pollinate and possibly produce some interesting offspring if you grow more then one variety. Seeds are at the centre of a flower, when flowers are completely dry, crumble the head between your hands, winnow the chaff to remove and collect the seeds.

Try some zinnias this year.


Share this article
Posted in: BOGI
Tagged with: Zinnia
Back to top