The broad bean, Vicia Faba, is part of the vetch type of legumes and a distant relative of the French bean. Broad beans are also known by the names Horse bean, English beans, Windsor beans, Fava bean, Faba bean or Tic bean. This bean originated in Northern Africa and Southwest Asia. It was only a small step from Northern Africa to the Eastern Mediterranean where there have been recordings of the Broad bean as early as 6000BC.

Broad beans are not the easiest plant to grow in our climate, but are worth giving a try and hoping winter lasts long enough to get a good crop. Even though you can eat the pod of this bean when it is very young it is the seed that is usually eaten. Broad beans need cooler weather to grow successfully and are easy to grow, so the best time to plant Broad beans in Southeast Queensland is during May and June. Broad beans like their soil to be slightly acidic (pH 6.0 to 7.5). Prepare your soil a couple of weeks before planting seeds with plenty of organic matter and a good general fertiliser. Soak your seeds for at least 12 hours before planting, I add a pinch of Epsom Salts to the water to speed up germination. Plant the seeds about 5cm deep, 15cm apart in double rows about 20cm between and 80cm between sets of double rows. Water in well with diluted seaweed solution then don't water again until seeds have germinated. When plants are about 20cm high give them a light application of a general fertiliser. Broad beans usually need support, the best way to do this is to put stakes each end of the row (also in the middle if you have a long row) weave string between the plants as they grow or grow them against some wire mesh and tie them to the mesh. Broad beans take 16 to 20 weeks to reach maturity. After the crop is finished chop up the leaves and roots and dig into the garden to add nitrogen to the soil. In some countries broad beans are grown as a cover crop, to avoid leaving soil bare and later dug into the soil.

Broad beans like to be planted with potatoes, lettuce and sweet corn but don’t plant with fennel. 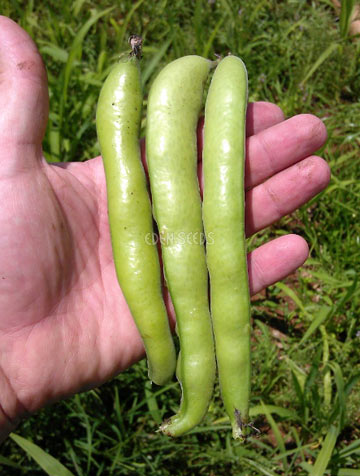 Pinch off the top to deter blackfly aphid, when the first pods start to develop pinching the tops out also helps the plant develop more side branches. Insect pests such as Heliothis caterpillars, aphids and thrips have been known to attack broad beans. They can also be susceptible to Chocolate spot fungal disease and rust. Spraying with a soap spray or wettable sulphur may help. Snails seem to like broad beans when they are small so set a few snail traps if they are a problem in your garden.

Young pods can be harvested and eaten like French beans but when the pods are more mature remove the seeds and eat only the seeds. Harvest pods when seeds are fully formed but not hard. The tips of the plants can be cooked and eaten like spinach. Seeds can be boiled, steamed or sautéed and served hot or cold as a green vegetable. Seeds are best eaten within a few days of harvesting, to keep them until later, remove the seeds from the pods and blanch in boiling water for ½ a minute, drain, cool quickly, package and freeze. The time to pick beans for shelling is when the beans have begun to show through the pod when the scar on the side of the bean is still white or green. When the scar is black you have left it too long they are still edible but will be tough.

The Broad bean seed has a double skin. When young these are quite tender but when the seeds are more mature it is often better to dip seeds in boiling salted water for a minute, then drain and remove the skin.

Some Asian food supermarkets in Brisbane sell packets of Broad beans which have been fried or roasted, causing the skin to split open, and then salted to produce a crunchy snack. These are popular in China, and also in Thailand where their name means "open-mouth nut".

Broad beans are full of many vitamins, minerals and L-dopa which is a chemical the body uses to produce  dopamine which helps with learning, mood control and motivation, definitely sounds like we should eat a few every day.

From PhDiva “Pythagoras may have had good reason to ban the eating of beans, it appears that broad beans were the forbidden fruit of Ancient Greece: In the Arcadian variant of the tale, Demeter gave them all the fruits of the soil except for broad beans. This one pulse that she withheld can be explained by its use in a variety of mystery cults. Raw broad beans are rich in a form of dopamine (levodopa) – some varieties can be fatal if eaten in excess – and so were only prepared as part of select religious ceremonies. Modern medicine has also shown that many Mediterranean peoples suffer from a hereditary deficiency of the enzyme G6PD (Glucose-6-phosphate dehydrogenase); this deficiency protects them from the full effects of malaria, but makes them more susceptible to the mind-altering properties of beans.”

In order to prevent people eating broad beans at home, a variety of holy laws were created, with associated ‘explanations’ for why they were taboo, and so eating them was made into a criminal offence.

Cut ham or bacon into small pieces and finely chop parsley, sage and onions, place into a saucepan with a little oil and fry until slightly browned then add tomato paste

After a few minutes add about 650 ml water, stir and bring to the boil

Add broad beans to the soup

Serve with fresh bread or toast.

Cook for a few minutes. Salt and Pepper to taste.

Serve with parsley sprinkled over the top.


Share this article
Posted in: BOGI
Tagged with: broad bean
Back to top