When I was a child growing up at The Gap our Cape Gooseberries came up almost like weeds every year. Many gooseberry didn't make it upstairs to the cooking pot as we kids couldn't resist tasting a few as we walked or ran past a bush when playing or we were sent to pick some for Mum. Most of those that made it to the cooking pot were made into "doobilly jam" (gooseberry jam) as my youngest sister called it when she was quite young. Back then the Cape Gooseberry bush didn't seem to get any diseases or pest problems.

We are finding a lot of fruit and vegetables that are native to South America grow very well in Australia and so it is with the Cape Gooseberry. The Cape Gooseberry, Physallis peruvian, (around the world it is also known as Popati, the Incan Berry, the Golden Berry, Husk Cherry, Ground Cherry, Poha, or Poha Berry) native to Peru and Chile where it is not a commercially grown crop but is found in many small lots and in local market places. From there it found its way to South Africa and was particularly grown by early settlers at the Cape of Good Hope in the early 1800's where it came by its common name Cape Gooseberry. Travellers on sailing ships headed to Australia must have liked their flavour as they carried the fruit and seed with them. The Cape Gooseberry became a popular fruit with the early settlers as it was quick to grow and produce fruit and appeared to grow well in New South Wales, Queensland, Victoria, South Australia, Western Australia and Northern Tasmania.

How can you use the Cape Gooseberry if you decide to grow It? They taste great either raw as fruit, in salads, great with cheese trays or cooked in deserts, stewed, 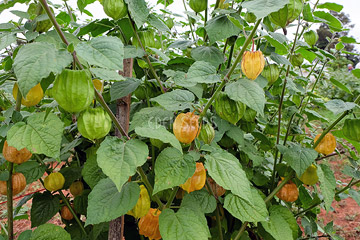 tarts, pies, delicious jams, chutneys, dipped In chocolate and can even be dried, probably a very under used fruit to date. In Colombia the fruits are stewed with honey and eaten as dessert. They are a great healthy snack for school and lunch boxes (coming with their own wrapping). If you want to collect enough to make a jam freeze them as you pick them, this stops them all being eaten by visitors to your pantry.  Dry some and use them like raisins or goji berries they taste like a sweet and sour lemon candy. Because of their high pectin levels cape gooseberries are very good for making jams and jellies and if overcooked make delicious toffees. Gooseberry jam is so easy equal parts of berries and sugar is all it takes.

As the Cape gooseberry belongs to the same botanical family as the tomato, eggplant, potato and other member of the nightshades it will grow in similar soils and climatic conditions. Like tomatoes the cape gooseberry is self pollinating. It likes a sunny position and will grow well in a wide range of soil types from gravely loams to heavy loams, but does best in a moist well drained sandy loam and seems to thrive on neglect. If drainage is a problem plant bushes on mounds. They need to be protected from heavy frosts. Gooseberries grown in highly fertile soils often fail to ripen properly.

The Cape Gooseberry is usually grown from seed (drop one mature gooseberry in the garden and you will have gooseberries for the next umpteen years) and can be planted in much the same way as tomato seeds. In frosty areas plant after the last frost but in frost free areas Cape Gooseberries can be grown all year round often producing their best fruit from winter through to mid spring. During the hot summer months they need an adequate supply of water to produce fruit. Their feeding roots are very close to the soil surface so a good layer of mulch is essential to keep the soil moist. Although often grown as an annual it is a perennial and as such can be pruned back after cropping, cutting out any dead growth and given a mulch of broken down manure. During the growing season, tip prune to encourage bushy growth. If your garden has plenty of space plant bushes up 1.5 metres apart but in smaller gardens closer together is okay but the harvest will be less. Fertilise only in the early stages of growth or after pruning as even moderate fertiliser tends to encourage excessive leaf growth and this inhibits flowering. High yields of gooseberries can be achieved with little or no fertiliser. The plant needs consistent watering to set a good fruit crop, but can't take "wet feet".  The plants become dormant during drought. Cape gooseberries are self-pollinated but pollination can be improved by a gentle shaking of the flowering stems or giving the plants a light spraying with water. After pollination the fruit takes 70 to 80 days to mature. If you are short on space Cape Gooseberries will grow well in a large pot.

Share this article
Posted in: BOGI
Tagged with: Cape Gooseberry
Back to top