Jicama, (pronounced hee - kah – mah) Pachyrrhizus erosus, a member of the Fabaceae family is a climbing legume vine native to Mexico. It was introduced to the Philippines and the Asian area about 300 years ago and has become very popular. The name jicama comes from the Nahuatlan Indian (Aztec) language, xicama which means ‘edible storage root’. It is also known as climbing yam bean, Mexican potato, Mexican water chestnut, Mexican turnip, singkamas, saa got, sankalu, ahipa, man kaew, Chinese turnip, lo bok, chop suey bean, and Chinese potato. Jicama is a warm season perennial root vegetable that is usually grown as an annual, somewhat like a sweet potato plant but its tuber looks more like a turnip. As well as Pachyrrhizus erosus there is also Pachyrhizus tuberosus which produces a more elongated tuber. 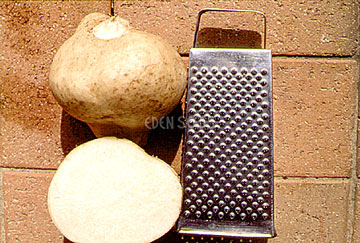 The plant grows as a straggly vine and can grow up to 6 metres tall which in its native Mexico is usually cut back with machetes to 1 – 1.5 metres. Bruce says ‘it likes to climb up a trellis or other plant (in my case the Tamarind Tree)’. It produces pretty white or blue flowers which soon become seeds pods. In some parts of Asia these pods are eaten when very small but be wary ‘All Above Ground Parts of the Jicama are Poisonous’. The seed pods and seeds contain rotenone, a toxic substance which is used as an organic insecticide. It is usually recommended to remove pods as they appear, usually in Autumn, so all plant energy is put into the tuber, however it may be necessary to leave a couple of pods to mature for the purpose of saving seeds. To get seeds, leave pods on the vine, in late winter they will turn brown. Pick the brown pods before they dry out as when the pods dry out, they split and throw the seeds in the ground to make next years crop. Please be careful children are not tempted to eat these pods. In South America the natives have been known to crush the seeds and toss them into creeks and water holes to stun the fish causing them to float to the top for retrieval. Jicama will grow in most soils preferably rich, fairly loose but definitely well drained and in full sun, at least 6 hours a day. They don’t like frost and need at least 4 to 6 months even up to 9 months of warm weather to be ready to harvest . They can be grown from tubers or seeds with seeds being preferable, wait until the soil has warmed up before planting. In the south east corner sow seeds in Spring. As seeds have a hard coating it helps germination if they are soaked in warm water overnight before planting. Sow seeds 1cm deep and pat the soil down firmly over the seeds to keep them moist. Water them regularly until they are at least 8cm tall. As they grow pinch off any flowers to prevent pods forming and to put most growth into the tubers.

These plants are usually pest and disease free. Leaves and flowers can be brewed to make a spray for garden pests. The tuber is mild, crunchy and slightly sweet, small tubers can be harvested after about 4 months but remember ‘All Above Ground Parts of the Jicama are Poisonous’. Tubers weigh from 250g up to 2.5kg. After harvesting allow the tubers to dry fully before storing in a cool dry location.

‘According to the Guiness Book of Records the heaviest Jicama weighed 21 kg (46 lb 4.8 oz) and was grown by Leo Sutisna (Indonesia) in Bandung, West Java, Indonesia, and weighed on 25 January 2008.’

Jicama can be used raw in or as part of salads. They can be steamed, baked, boiled, mashed, fried or stir fried in much the same way as potatoes. In Asian dishes they are often substituted for water chestnuts or used in Spring Rolls and sweet and sour dishes. The beauty of this vegetable is that it easily absorbs flavour from other ingredients it is cooked with and retains its firm texture if not overcooked. To prepare the jicama for use, cut into quarters and remove the skin with a paring knife. In Mexico it is often sliced thinly then sprinkled with salt, lemon juice and chilli sauce.

From the daughter of a BOGI member who lives in Mexico

“Jicama is not a vegetable that you cook. It is great in salads, as a summer veggie and is really great for kids lunches as it keeps pretty well for the day. The most common way to eat it in Mexico is as thick slices and generally served with fresh lime juice and chilli powder. My absolute favourite way to eat it, is like mum says: freshly grated jicama, carrot and beetroot each taking up a third of  a plate in the form of a wedge. This can be adorned with tomato and cucumber slices and lime wedges. I take a bit of all 3 grated vegies on my plate and mix it with ‘Thousand Island Dressing’ and it is delicious. With a barbecued steak, fish or chicken it all seems to work. I have also served the 3 grated veggies in a lettuce leaf, that is fun too.

I hope that this helps. Take care,

Medicinally Jicama is an antioxidant, helps relieve inflammation, gout, hangovers and cleanses the kidney and liver. It is said to strengthen capillaries and boost the immune system.

If you are pressed for space try growing them in a pot or polystyrene box, they will grow just about everywhere.

You will be impressed with this summer growing vegetable.

Seeds of Jicama are available online from Eden Seeds.

Finely slice capsicum and shallots, coarsely grate jicama and carrots, place in large bowl and toss together. Finely chop garlic and ginger, place in smaller bowl and mash together with sugar, then mix in vinegar and sesame oil. Pour over veggies in larger bowl add in coriander and toss to coat. Add salt and pepper to taste

Remove skin from jicama and cut into julienne strips. Heat oil in a heavy based pot. Place jicama chips into hot oil and cook until crispy. Remove from oil and drain on paper towels. Toss in a mixture of onion powder, garlic powder, paprika, salt and pepper and serve hot.


Share this article
Posted in: BOGI
Tagged with: Jicama, Yam Bean
Back to top