Recently, I was sorting through my seed container looking for some seeds to plant into my little paper pots in mini greenhouses (September newsletter) and I came across some portulaca seeds. I bought them last year and didn't get around to planting them. This got me thinking what a versatile group of plants is the Portulacaceae family. The name 'portulaca' brings a few plants to mind. First is the annual with almost miniature rose like flowers or the colourful sun jewels that grow during summer. There is purslane, called a weed by many when really quite useful as an edible plant and herb and then there is the one that appears on my footpath, Portulaca pilosa, every summer, and the Jade plant. These are but a few of the Portulacaceae family which comprises about 100 species.

Portulacas in their various forms are annual succulents but under the right conditions can sometimes grow as perennials. Their leaves vary in shape from cylindrical to flattish and long or flattish and round but all are fleshy. Most will self seed but some of the hybrids will revert to earlier forms. Their seeds are very small, like grains of fine sand. When planting it helps to mix them with dry sand before sowing. This family of plants thrive on poor soil and neglect, too much fertiliser or water has been known to kill them. Find them a well drained sunny spot in your garden. They love hot weather and withstand drought.

Portulaca grandiflora is most popular with home gardeners, two of the most popular cultivars in this group are the ones with double rose like flowers and cylindrical leaves and the five petalled single ones with flat leaves. Their flowers come in a range of colours from white to yellow to orange to pink to red and varying shade in between and more recently in bi-colours. Most pests leave them alone but mealy bugs can take a liking to them. The easiest way to treat mealy bug is with a cotton bud dipped in methylated spirits.

The flowers traditionally only open when in full sun but many of the newer varieties will only close at night and on very cloudy days. This can be noted in their name in Bangladesh they are called 'Time Fuul' (Time Flower) and in Vietnam it is called 'Hoa muời giờ' (Ten O'clock Flower). Once established these will flower all summer and autumn.

Portulaca grows very nicely in pots adding that splash of colour in your outdoor entertainment area. They will tolerate neglect and drought and still produce beautiful flowers. While some will grow 15cm to 30cm tall they usually are a ground hugging plant making a colourful border or a filler for bare spots in the garden. Bees are attracted to their nectar.

While usually grown from seed if you have a plant you want to grow elsewhere or share with friends take a cutting, it will propagate easily. 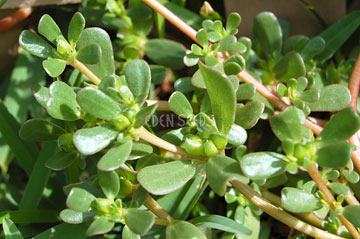 Portulaca oleracea would be the most common of the Portulacaceae family, many refer to it as a weed. It is also known as Common Pigweed, Common Purslane, Inland Pigweed, Munyeroo, Neverdie, Purslane and Red Pigweed. I'm sure you've seen it in your garden. It is a prostrate succulent with spoon shaped shiny fleshy leaves and red to brown stems. It gets small yellow flowers from November to March. While it often grows as a fairly scrawny plant with a little extra care it can become quite lush. The leaves stems and buds are edible with the leaves having a mildly sour taste. It is eaten in many countries around the world, aboriginals and early Australian settlers ate its leaves. It can be eaten raw or cooked, used in salads, stir fries, soups, stews, and the seeds can be used for bread and cakes. The Greeks call it andrakla, and use it in salads and casseroles, in Turkey and Albania it is baked in pastries and used like spinach. Purslane is unusual in that it has higher levels of omega-3 fatty acids than any other leafy vegetable. It does have high level of nitrates and oxalates which can be toxic to sheep and cattle. For humans cooking can lower the levels of these.

Traditionally in Europe it was thought to help with happiness, love, luck and sleep and provide protection from magic. Medicinally its leaves can be used to treat insect and snake bites, boils, sores and pain from bee stings.

Portulaca oleracea can be grown from seed or cuttings and is easy to grow. BOGI seeds has seeds for Yellow Purslane which grows larger than the Common Purslane.

Portulaca pilosa is low-growing and found in areas of poor soil (like my footpath), on the edge of saltpans and urban areas where the salt content of soil is high. it has cylindrical leaves and pink flowers.

This plant can grow in sun or shade, is at home in the garden or in a pot, indoor or out but not too much water. It is used to growing in some pretty dry areas.

Portulacaria afra has small roundish fleshy leaves (around 1cm long), reddish brown stems and a trunk that can grow up to 90cm diameter and up to 5 metres tall. You can prune it to suit your requirements as small as a bonsai or a tall as a shrub. It is easy to propagate from leaves or stem cuttings, cut it, let it dry for a couple of days then plant in moist sand or propagating mix.

In its native environment its leaves are eaten by many animals, these leaves are also suitable for us humans to eat. They are juicy, crunchy and mildly sour.

If the conditions you grow it in are good enough it may produce small pink scented flowers in summer which attract bees. Later these flowers are followed by small fruits with one seed in each.

Colourful Portulaca plants can be grown from seeds by ordering from Eden Seeds online store.


Share this article
Posted in: BOGI
Tagged with: portulaca, purslane
Back to top