In recent months the topic of ‘Tomatillos’ has popped up a few times. The first time was when my hubby’s mate sent me some seeds (tomatillos) that wouldn’t strike very well for him, then Cheryl, BOGI Seeds, brought a tomatillo she had grown to the open day at Jocelyn and more recently a friend told me of the delicious Salsa Verde her daughter in Mexico makes. All this and seeing my Cape Gooseberries doing quite well I decided I should try growing tomatillos. I planted the seeds given to me by my hubby’s mate and after a while was rewarded with 6 tomatillos 2 for me, 2 for my hubby’s mate and 2 for my friend whose daughter lives in Mexico.

The tomatillo (Physalis ixocarpa) also known as the husk cherry, husk tomato, jamberry, mexican tomato, ground cherry, tomate verde (Spanish for green tomato), tomate or milomate is a member of the Solanaceae (nightshade) family. It is closely related to the Cape Gooseberry, Chinese Lantern (Physalis alkekengi) and a more distant relative of the tomato. It is a native to Mexico and the Andes and is widely cultivated throughout Central America where it is the main ingredient in green salsa sauces. Evidence of its domestication by the Aztecs dating back to 800BC has been found in recent archeological digs. When Christopher Columbus returned to Europe with many exotic fruits and vegetables the tomatillo did not find favour with the European palate and has been left to 21st century gastronomes to discover and appreciate.

Eden Seeds has Tomatillo seeds which can be ordered online.

It is an annual that grows a thin paper like husk (like a cape gooseberry) with a small spherical fruit inside which can be either green, purple, yellow or red when ripe, depending on variety, with green being the most common. It will fill or even spilt the husk as it matures. The fruit has a flavour ranging from tart to barely sweet, very suitable for savoury dishes. However don’t eat any other parts of the plant as they are poisonous.

Tomatillos grow very similarly to cape gooseberries and tomatoes but they are much hardier and less prone to diseases than tomatoes. If you decide to try growing some first thing to note is that you must plant at least 2 of them as their flowers must be cross pollinated (two or more plants are needed for proper pollination), solitary plants don’t usually set fruit and they cross pollinate via insects. Plants will grow to about 1 metre tall and can be staked or allowed to sprawl on the ground, so allow a little extra space. If you let your plants sprawl over the ground they will often set down roots from the leaf nodes. Soil should have a pH of about 7.0 and be prepared ahead of planting time with lots of broken down manure or organic matter. They grow best in full sun but will tolerate a little shade and they don’t like wet feet so a well drained position is necessary. Seeds can be planted directly into the garden bed or into a seed tray. They don’t like frosts so in cooler areas seeds should planted in trays or pots and kept in a protected spot until the weather starts to warm. Tomatillos prefer warm soil and a long warm growing season, when seedlings are large enough to be planted out in the garden, plant at least 45 to 60cm apart. Plants require even soil moisture during the development and fruit setting period so mulch plants to retain moisture in the soil and deter weeds. Established tomatillos are however drought tolerant. During their growing season feed with liquid fertiliser.

When your Tomatillos start producing heaps of yellow flowers they do not always set fruit but they will attract bees to your garden which is beneficial to your plants. Tomatillo flowers are very similar to the Cape Gooseberry but a much brighter yellow. Too much humidity or prolonged high temperatures can affect fruit set, but like pumpkins and zucchini just when you are ready to give up they suddenly start to set fruit.

Like cape gooseberries it is difficult to tell through those husks when Tomatillos are ready to pick but they are edible at any stage (quite tart when too green but sweetening as they ripen). Rule of thumb is when the fruit almost fills the husk or starts to split the husk it is ready to use, at this time the husk dries and turns a papery brown colour. Depending on variety the fruit can range from 2 cm to 5 cm in diameter. From planting to harvest is usually about 3 months. The tomatillo fruit should be firm and have an acidic flavour. Cut tomatillos from the plant as they mature to encourage more fruits.

After harvesting peel the husks, wash off the sticky stuff then dry ready for use. They can also be stored in the refrigerator for up to a month or put them in zip-close freezer bags and freeze whole for later use. They can also be frozen chopped or pureed. Tomatillos are very sensitive to ethylene gas so do not store tomatillos with vegetables and fruits that give off ethylene gas such as apples and pears.

Common varieties of tomatillos are:

Tomatillo ‘Purple’  is an heirloom variety that is prolific and productive. Fruits are 3-4 cm across with a dark purple skin. They have a sharper flavour than green tomatillos and make an attractive purple salsa

Tomatillo Verde from Eden Seeds is a traditional Mexican heirloom, regarded by some as the best of the green tomatillos, is a prolific bushy plant growing 1m tall which can tolerate partial shade. It produces larger fruit up to 5cm that are ripe when the fruits burst through husk. It has a very mild skin and sweet, crisp flesh, so you can use it in salads salsas, or cooked.

I have been told tomatillos have less disease and pest problems than tomatoes. So far my small plants have only had some red spider mite which I treated with soap spray. They are sometimes attacked by cutworms, snails and slugs. Diseases which affect them are usually when the humidity is high during mid summer so don’t put plants too close together allowing plenty of air circulation. 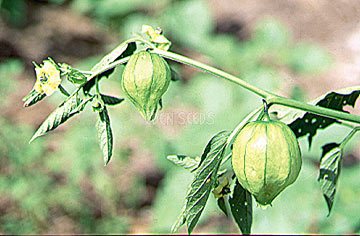 Here the most common name for the green tomato is tomatillo although some do call it tomate to distinguish it from jitomate (the red ones). I have never grown it personally but intend to as I have seeds for it and I use it a lot in cooking a dish called Salsa Verde. It is delicious and it is probably the family favourite. It is easy to make. Make as follows

The tomatillos need to be boiled to soften them (remove husk and clean first) - about 1 kg. You know when they are done as they go from a bright green to a khaki green colour. Then liquefy these with a large onion (cut into quarters to make blending easier), 4 - 6 cloves of garlic (peeled), a huge bunch of cilantro/coriander (washed) and stock. The stock comes from whatever you want to cook to add to the green salsa - our family favourites are pork spare ribs (make a stock with them and cook till tender) or pork crackling (very popular in Mexico but not sure how easily you can get that or pork rinds but they sure add a delicious flavour to the dish. Another popular addition is chicken legs and/or thighs. Again make a stock with them. Once the stock is ready you add it the ingredients in the blender to liquefy them more easily.

When you are liquefying the tomatillos don’t fill up the blender with them as when they are hot they tend to kind of explode so just put 4 - 6 in at a time - you will feel the lid rise a bit as you start to blend so I always put a tea towel over the lid to not be showered with hot liquid. Add the liquid to a frying pan that has higher sides and bring to the boil, be careful as it comes to the boil pretty quickly and you do not want to burn the salsa as it does not taste well if burnt. Once the mixture has come to the boil turn it down and let it simmer, stirring quite often. If you want the salsa to be spicy just add some serrano chillis - I usually boil them with the tomatillos, just cut off the ends and add them seeds and all.

Season the salsa with chicken or pork stock cubes to taste. For about 1kg of tomatillos 4 stock  cubes chould so, it depends on your taste. Once the green salsa has simmered for a good 20 - 30 minutes, add the precooked chicken legs/thighs or pork ribs and allow to simmer for 20 minutes. Reheated the dish tastes even better. Serve with rice (which I cook with the left over stock rather than water). If adding pork rinds or crackling you need to allow about 30 - 40 minutes for them to soften in the salsa.

P.S. The husks of tomatillos boiled up and strained make a tea that is apparently good for people with kidney infections and diabetes

2.         Combine all ingredients, including brown and juicy tomatillos and puree until smooth.

3.         Cool in refrigerator. Serve with your favourite salad or over nachos.


Share this article
Posted in: BOGI
Tagged with: tomatillos
Back to top