What Herbs are in Your Garden? How About Some Rosemary

Rosemary (Rosmarinus officinalis) is a perennial herb, native to the Mediterranean region. Its beautiful name, which has been bestowed upon many women comes from Latin ‘ros’ (dew) and ‘marinus’ (sea) i.e. dew of the sea, probably as it was found growing along the Mediterranean coastline. Rosemary is an important herb as shown by its title ‘officinalis’ and as seen through its place in folklore and medicine.

Rosemary comes in various sized bushes most commonly up to a metre high but some varieties up to 2 metres and also in a prostrate form. The most common 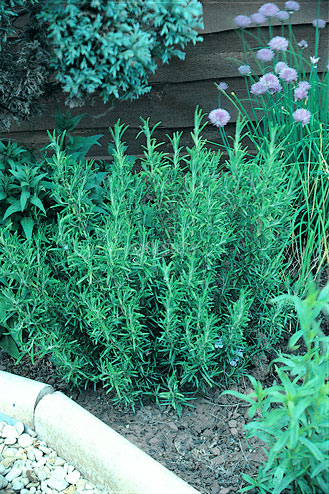 flowers are in shades of blue/mauve but there are also purple, pink and white flowering varieties. Its aromatic leaves have a dark green glossy upper surface and a white felt like underside. The aroma from rosemary tends to attract all sorts of creatures to your garden including bees, butterflies and birds while repelling cabbage moths, bean beetles, and carrot flies. Cabbages and beans can be strategically planted in its vicinity but not potatoes. It is mainly pest resistant, even the grass hoppers give it a wide berth. It is best kept trimmed so it doesn’t look straggly and can even be pruned into a hedge or for topiary. Regular harvesting will achieve the same result.

Rosemary likes to be grown in full sun in well drained soil which has a slightly alkaline pH 7-7.8, if necessary add some extra lime to the soil. It will grow well in pots, copes well with drought but will turn its toes up if the soil is too wet or the air too humid for a prolonged period and can be susceptible to frost.

Rosemary can be planted by seed in Spring, Summer or early Autumn but much easier find a friend with an attractive bush and in late summer take a few cuttings. Take a cutting about 15cm long, strip the leaves from the bottom 5cm and plant directly into soil, into potting mix or into your cutting tray. Some people like to cover them with a plastic bag, some like to use hormone powder or honey to help them root, they usually strike without too much trouble.

Rosemary can be used fresh or dried in many culinary delights including custards, egg dishes, pickles, jams, cakes, biscuits, salads, breads, casseroles, stuffing and of course with it’s buddy lamb. Make a simple marinade of rosemary, olive oil and lemon juice to use on chicken or lamb or mix with oil, garlic and sea salt to coat potatoes before roasting, use a stalk or two as a brush at the barbecue or strip the leaves and use them as skewers for kebabs. To dry leaves for later use, dry them quickly by hanging upside down in a cool airy place to preserve the oil in them.

The Ancient Greeks believed rosemary improved the memory, so they twined it through their hair when they were studying for exams. In recent studies it has been found that rosemary contains blockers that slow down or prevent the breakdown of acetylcholine (a brain chemical, which is involved in memory function) in the brain. It is also a symbol of remembrance commonly used at funerals and commemorative ceremonies such as ANZAC Day and is often planted in graveyards. Medicinally over the years it has been used for baldness, gout, headaches, depression, liver complaints, improving blood circulation, muscular sprains, rheumatism, arthritis and to control dandruff. Rosemary is also useful as a moth repellent, a disinfectant, an air purifier and in perfumes. Gargle rosemary tea {infuse 1 teaspoon dried (or 3 teaspoons fresh) rosemary leaves in 1 cup boiling water} for mouth or throat problems. In Europe during the Black Plague a branch of rosemary would be burnt in a house to protect occupants for the plague. It was also believed that placing a sprig of rosemary under a pillow before sleep would repel nightmares, and if placed outside the home it would repel witches. Used in your bath water after a hard days work it will soften the skin, relieve stiff joints and relax aching muscles. Rosemary oil is an antiseptic that can be used as an insect repellent.

Share this article
Posted in: BOGI
Tagged with: Rosemary
Back to top