I bought my first coreopsis in early 2011 as a flowering plant to sit in a pot on the table, when it stopped flowering I trimmed it back and planted it into the garden bed. There it stagnated for most of winter but by mid spring it had grown in size and buds then flowers started appearing. I bought a couple more seedlings at the markets and planted them in the same garden bed. A couple of times I gave them a haircut and they responded, growing bushier and providing another flush of flowers. 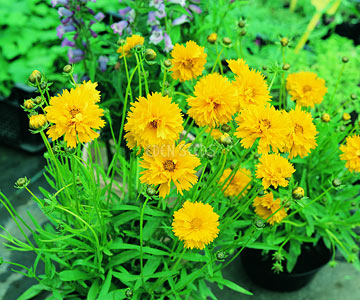 Coreopsis, also known as tickseed, is a member of the Asteraceae family, most species of which are native to various areas of North, Central or South America. The name Coreopsis is from the Greek koris, meaning "bug," and opsis, meaning "view”, the seed looks like a bug and many say like a tick. Some varieties are perennials and others annuals. Traditionally these are a very hardy species but some newer hybrid varieties are less so. They will grow as a clump from 20 to 60cm high. I am growing varieties of Coreopsis grandiflora which get bright yellow double or semi double flowers. There are some other varieties with single flowers and with varying shades of yellow flowers, some red and some pink, there are also some with multiple colours.

In America they were originally a prairie flower and as such will grow in most soil types, preferably well drained and in full sun. Coreopsis can be grown from seed and perennial varieties can also be grown by division and from basal cuttings. Seeds can be planted directly into the garden bed where you want them to grow early in spring. Young plants require regular watering until established but will then continue to grow with or without regular watering. Deadhead after flowering and they will usually flower again, in winter cut back to a few inches and they will grow up nicely for next summer. Mine have been growing and flowering well throughout spring and summer. Give them a feed of liquid fertiliser from time to time and a handful of Organic Xtra at the beginning of spring. Many varieties will self seed so be wary if you live close to bushland not to let them escape. Coreopsis is known to grow wild in areas of Western Australia and New South Wales. In Queensland it was first recorded as naturalised in Kingaroy in 1944 and is seen on the roadside from Tin Can Bay to the New South Wales border and in the Stanthorpe area. So be careful where you grow it.

Coreopsis make ideal cut flowers and are attractive to some butterflies and bees. They would definitely make a colourful, low maintenance addition to your summer garden.


Share this article
Posted in: BOGI
Tagged with: coreopsis