Buckwheat is another great food I thank my Polish friend for introducing me to. Buckwheat is a tasty, textured alternative to rice or pasta and just as easy to cook. I started to research growing buckwheat after reading how it attracts beneficial insects. I have decided to grow some in my garden and experiment with it.

Some reasons to grow Buckwheat include:

Buckwheat, Fagopyrum esculentum, is not wheat or a relation of wheat, it is not even a grain, it is the fruit/seed of a plant actually related to rhubarb and sorrel. It is so high in protein that it is sometimes called  'meat of the fields'. Buckwheat was first cultivated in south-east Asia around 6000BCE, their traders transported it to the Middle East and Europe and it was first grown in Australia in the 1980's, as a result of demand from European migrants. 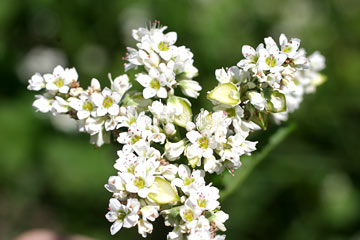 I am planting some now as research I've done indicates it can be grown at any time when there is no frost but in extremely hot weather it will not produce as many flowers or fruit/seeds. To grow some buckwheat soil needs very little if any preparation but digging in a fertiliser similar to Organic Xtra before planting will produce a better crop but don't use a high in nitrogen fertiliser. Buckwheat will grow in all soil types and a wide range of pH levels but does best with a pH 6-7. Select a site that gets sun for most of the day and is well drained. Plant seed about 1-2 cm deep either by broadcasting then raking over or plant in shallow furrows then fill in over seed. Give a light watering either before or after planting and keep soil damp until germination. Buckwheat will not tolerate cold or water logging. Seed will germinate in less than a week.

In ideal conditions buckwheat can be blooming in less than a month. From an article by Barbara Pleasant 'Throughout the summer, I sow buckwheat in any spot bigger than a dinner plate that won't be planted for a few weeks'. If growing as a green manure crop, a week after the first flower appears slide a sharp spade under it and turn it over, leave for a few weeks before digging in and planting your next crop. Poor soil can be greatly improved with a green crop of buckwheat. If you are growing as an insect attractor let it go to flower and seed. If you are growing for saving/harvesting the seed it will probably take about 12 weeks. When most of the seeds become dark brown cut the stems near the ground. Thresh the buckwheat by laying them on a clean sheet and beating them with a broom. When as many seeds as possible have been removed, the husks can be removed by putting them in front of a fan a couple of times. Your buckwheat is then ready to grind the seeds. The easiest way is probably in a food processor. Buckwheat is not only good to eat but good to grow and if allowed to set seed it will often self-sow readily next season.

Uses for buckwheat include:

Buckwheat is a source of high quality protein, amino acids and vitamins. And it said to aid in the control of high blood pressure and cholesterol. If you have a little or larger space in your garden plant some buckwheat, it will be of great benefit to your garden.


Share this article
Posted in: BOGI
Tagged with: Grain, Buckwheat