You know all those items on the supermarket shelves that are "99% fat tree" well celery really is. It consists mainly of water, it has the third highest sodium level among vegetables coming after silverbeet and shallots.

The plant species Apium graveolens includes 2 vegetables which are not grown by many gardeners. These are celery and celeriac. Celery will grow well in south east Queensland during the cooler months while celeriac prefers a cooler climate but maybe worth a try. Celery is a biennial, which conditions it will only flower and set seed in its second year of growth.

From Wikipedia, the free internet encyclopaedia "Originally celery was a wild plant found in the marshes of Europe, North Africa and Southern Asia, ancient peoples considered celery a gift from the gods, capable of rejuvenating body and mind. First recorded in 850BC in Homers Odyssey, wild celery was not eaten as food, rather used as a medicine. Its therapeutic reputation varies from country to country in Rome it was thought to cure both constipation and hangovers, in Egypt the stalk was prescribed for all masculine dysfunctions and the tuber root prescribed for female disorders. Throughout the Middle Ages, celery was used to settle acid-stomach and to relieve arthritis. The modern crunchy and stringless variety of celery eaten today was developed in Utah, USA."

If you want to give it a go, prepare your soil with plenty of broken down organic matter and manures with a pH between 6.0 and 7.5. Plant seed into a seed tray 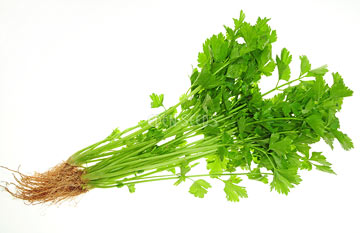 about March and transplant seedlings when they are about 15 cm tall. Many people prefer their celery to have tall pale stalks. To achieve this (blanching) grow plants in a sleeve of an open ended milk/juice carton, a section of drainage pipe, cardboard, paper or plastic to exclude sunlight. This will encourage the celery to grow tall and the stalks will be pale. This method of growing lends itself to harvesting the whole plant at one time. Home gardeners often prefer to harvest only 1 stalk at a time as needed and this is easier when the plant is grown without a cover, Try both methods and see which suits you best. A celery plant will last up to 2 years when harvesting only one stalk at a time.

While growing, which will take about 4 months to reach maturity, feed the plant with lots of liquid fertilisers (fish emulsion, compost teas, worm pee, etc.), Because of its shallow root system and high water content celery needs to be kept well watered and well mulched.

We can use celery from top to bottom. Celery leaves can be used to make stocks, stews, soups and for juicing.

The stalks (petioles) can be used in stews, soups, casseroles, stir fries, salads, vegetable drinks and snacks. They are an integral part of so many salads potato, waldorf, coleslaw, bean, macaroni, rice, Italian to name a few and really add that nice crunch and unique flavour.

Celery seed is used as a spice, in perfumes and pharmaceuticals.

Celery root can be used in soups, stews and juices.

Medicinally, celery has been hailed as essential since ancient times. All parts of the plant act as a diuretic therefore aiding in reducing fluid retention. In recent years all parts of celery have been promoted as beneficial for arthritis sufferers. It is claimed they also aid in weight loss, internal cleansing, anxiety and controlling blood pressure. Celery can cause an allergic reaction in a few people anything from rashes to anaphylactic shock.

Celery is a very healthy snack food for variety, fill the hollow with Vegemite, cottage cheese, peanut paste or any other spread or use it instead of chips or crackers with savoury dips and sauces. During the 1960's and 70's the fashion was to cut the celery stalk into sections about 1 to 5cm long, slit half way down each piece between the ridges and immerse in iced water, the cut sections would curl nicely. It was great for presentation and eating.

To freeze celery for later use in soups, stews, casseroles or stir fries, cut to desired lengths, blanch for 3 minutes in boiling water, drain, dry and freeze.

Some varieties of Celery from Eden Seeds include:

GREEN PASCAL – Dark green with outstanding flavour. One of the original selections.


Share this article
Posted in: BOGI
Tagged with: Celery