Leeks, (Allium ampeloprasum var. porrum), are a biennial vegetable that are usually grown as an annual. They are closely related to kurrat (Egyptian leeks), onions, garlic and elephant garlic. Leeks have been cultivated in Egypt and the Middle East for over 3000 years. It has been found in wall carvings and drawings as part of the Egyptian diet at archaeological sites dating back to 2000BC. The first leeks in Australia were grown from seed brought with the first fleet. Leeks are grown for their thickened stems (they do not have bulbs) which have a more subtle (even sweet) flavour than onions.

Leeks prefer an open sunny position but can tolerate a little shade. They will grow in any fertile well drained soil (sandy, alluvial and volcanic) but do better in moist clay loamy soils with a pH of 6.5 to 7.5. If the soil is too acid add some garden lime or dolomite. Soil structure and moisture retention can be improved by adding well broken down compost and manures when preparing the soil preferably for the crop before the leeks. In the Southeast corner of Queensland leeks prefer to grow during our cooler months and are not usually troubled by a little frost, if grown in our hot summers they are usually a poorer quality. They take from 4 to 6 months to reach maturity, while they are growing keep the soil loose and mulch well to keep the soil moist. Most people find them much easier to grow than onions. They will even grow well in containers.

Sow seeds directly into garden beds or start off in seed trays, whether planting directly into gardens or planting out seedlings plant into a trench 10 – 20cm deep. Don’t plant out seedlings until they are 15 – 20cm tall. After transplanting and in the early growing period apply liquid fertilisers regularly. By planting leeks in a trench and filling it in slowing as they grow, then mounding the soil around them we cause the white part of the leeks stalk to be longer. This can also be achieved by planting seedlings into drill holes and slowly filling them in or by wrapping the plant in paper as it grows. These growing methods exclude light from the base of the stalk and are ways of blanching so more of the leek is white and edible. When using the paper method of blanching water the soil not the plant as wet paper will encourage snail and slugs to take up residence. Give leeks room to grow by spacing them about 10cm apart. As leeks grow water them often enough to keep the soil moist but not wet. The soil which is mounded around the leeks should be a dry and fine texture if it holds too much water it will rot the leek. Leeks are not troubled much by pest or diseases. Harvest leeks when the stem is 2cm thick and the blanched section is 10 - 15cm long by lifting them from the soil with a garden fork so they don’t break. Leeks will only cross pollinate with other leeks not onions or other relatives. Leeks are good companions for onions, celery and carrots. 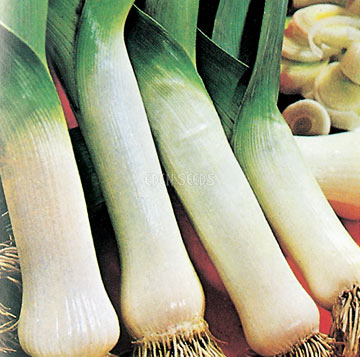 You can buy leek seeds online from Eden Seeds. These are the old traditional open pollinated varieties – our food Heritage.

As in the paragraph above the edible part of the leek is the white base and light green stalk, the dark green tops become woody, chewy and bitter. The tops can be used to tie other herbs to form a bouquet garni. Always clean away any dirt trapped between the leaves before cooking, the base is usually okay but as you slice further up the stalk it is often necessary to separate the leaves to clean out between them before slicing. Leeks can be boiled, steamed, stewed or sautéed, are delicious cooked in soups, stews, casseroles, pies, sauces, quiches and other  dishes and can be eaten raw in salads. They can be used instead of onions in many dishes. Leeks are best used straight after harvest and will keep well left growing in the garden but can be stored unwashed and untrimmed in the refrigerator for a week or two. To keep them for longer slice, sautée in butter then freeze. Because of their importance in Wales, leeks are used extensively in their cuisine.

Medicinally leeks, as with other members of the Allium family, are helpful in reducing ‘bad’ cholesterols and LDL while they help increase levels of good cholesterols and HDL and have anti bacterial properties. They are good for the kidneys and bladder and can be used in poultices to treat ulcers, corns, boils, carbuncles, acne and insect bites. They may also help to fight cancer.

Some interesting historical facts about leeks from Wikipedia

Place flour peppers and salt in bowl and stir. Add chicken and toss well. Shake off any excess flour. Heat oil and butter in frying pan over high heat, add chicken pieces and stir fry until lightly browned and sealed, but not cooked all the way through. Remove chicken from pan and set aside.

Place leeks and garlic in the pan and cook over medium hat for 5 minutes, or until soft and wilted. Add wine and boil for 1 minute. Add stock and cream and simmer gently for a further 5 minutes. Add chicken, peas and tarragon and cook for a minute longer. Remove from heat and let cool. Stir in parsley.

Preheat oven to 180ºC. Place pastry on floured surface, cut to suit bases, sides and tops of six 9.5cm pie tins. Spoon filling into pastry cases and brush edges with egg yolk, place tops on pies and seal with a fork. Brush tops with egg yolk and make three piercings with a sharp knife in the top of each pie.

Bake on the bottom oven shelf for 35 minutes or until golden brown.

Line a 2.5cm-deep, 11 x 34cm fluted tart tin, with removable base, with pastry, overlapping slightly. Trim excess. Prick the base all over with fork. Place on a baking tray in the fridge for 30 minutes to rest.

Heat the butter in a large frying pan add leek and cook, stirring occasionally, for 5-7 minutes or until soft. Set aside to cool slightly.

Arrange the leek, blue cheese and thyme in the pastry case. Whisk the cream and eggs in a large jug. Season with salt and pepper. Pour the cream mixture into the pastry case. Bake in oven for 25-30 minutes or until just set in the centre. Set aside to cool slightly. Cut into slices to serve.


Share this article
Posted in: BOGI
Tagged with: leek