The radish (Raphanus sativus) is an edible root vegetable which is part of the Brassicaceae family. Thought to have originated from Asia, where today wild varieties can still be found but it migrated with travellers to Egypt, the Mediterranean region around 3 BC then to Europe and eventually the Americas. The genus Raphanus in Greek means ‘quickly appearing’ as will be noticed with the quick germination of radish seeds.

In southeast Queensland we can grow radishes throughout the year but they do far better during the cooler months so now could be a good time to get your first batch planted. While we mainly grow radishes for their roots the leaves, flowers, seed pods and seed sprouts are all edible.

Radishes will grow in almost any type of soil but prefer a well composted soil and regular watering. Sow seeds directly into the soil, for bigger radishes, plant the seeds a little deeper. The quicker they grow, the better the flavour, if they grow too slowly they become woody and hot. Radishes grow well in the garden in a row of their own or planted in spaces between other plants with a longer growing season. They are also suitable to grow in containers, but need to be kept well watered. Radishes are often grown as a companion plant for beans, lettuce, nasturtiums, peas, tomatoes and cucumbers. They are said to repel many insect pests including bean flies, beetles from tomatoes and cucumbers. John, a founding member of BOGI only grew radishes to protect his beans from bean fly. When John’s beans began to shoot, he planted radishes all around them. John said his beans were perfect.

We all know the common cherry sized radish available in bunches from most vegetable outlets, but radishes vary greatly in size, shape, flavour and even colour. Radish leaves can be used when young in salads or like spinach in stews or stir fries. Flowers can be eaten raw in salads or cooked like broccoli. The young seed pods can be eaten raw separately or in salads. The seeds can be sprouted and the sprouts give a delicious peppery taste to salads. Daikon radish sprouts are used extensively in Japanese and other Asian cuisines. The root is mainly used in salads, sandwiches, dips or as a snack. The Daikon can be used grated, pickled, stir-fried or in soups. 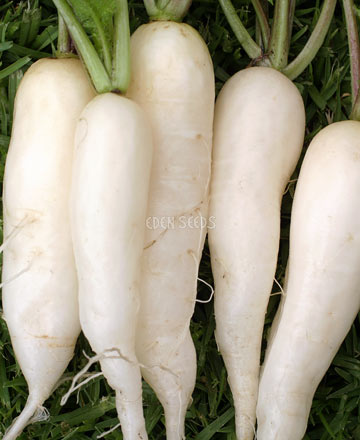 As the radish is often touted as one of the easiest and quickest vegetables to grow it is given to children as a first crop but beware many children are disappointed by the flavour. Sometimes it is better to grow something which takes a little longer and is a more palatable flavour for young ones.

Some varieties of radish seed available online from Eden Seeds and Select Organic include:

WHITE ICICLE - White skinned root to 15cm. Tender and mild flavour. Does not go pithy like other varieties when mature. Best summer variety. Sow all year.

Medicinally radishes are said to have antibacterial and antifungal properties and are useful for treating intestinal parasites or as a diuretic, an expectorant, a laxative and a poultice.

Some interesting radish facts from Wikipedia, the free internet encyclopedia

·     In 2005 in Japan, a giant radish grew through a section of pavement. Named Dokonjo Daikon, the vegetable received considerable interest from the public, and toy shops began stocking giant radish dolls.

‘Murder She Wrote’ protagonist Jessica Fletcher was revealed to be severely allergic to radishes.

When buying radish seed in Australia check the online range of radish seed from our website.

Prepare the Daikon by slicing and placing it in clean canning jars. Boil all the brine ingredients together to dissolve the sugar. Cool the liquid. Pour over the sliced Daikon and place in the refrigerator. Shake the jars occasionally. The pickle will be ready to eat in about two days.


Share this article
Posted in: BOGI
Tagged with: radish