It is many years since I last grew turnips so this year it’s time to give them a go. The turnip (Brassica rapa) is an annual which is thought to be a descendant of wild turnips in western Asia, Europe and the Mediterranean. They have been cultivated in these areas for thousands of years. In Australia they arrived with the first fleet. The turnips close relatives include the mustards and radishes.

Usually known as a root vegetable its leaves are also edible, the root and leaves can be eaten either raw or cooked, but are best eaten when small and tender. A turnip is usually white skinned with a purple, red or green top section (the part exposed to the sun), the flesh is white and it has no neck/crown with the leaves growing directly from the top of the bulbous section of the root. Turnips are often confused with Swedes, aka rutabagas (Brassica napobrassica) which are larger with purplish skin and yellowy/orange flesh and leaves which come from a crown/neck. Swedes are thought to have originated in Scandinavia or Russia and are an incidental cross between a cabbage and the turnip.

When is a turnip not a turnip? When you live in Scotland. In Scotland turnips are what the rest of us call swedes/rutabagas and swedes are what we call turnips.

Some varieties available include:-

If growing for leaves or to use in salads:

Turnip 'Purple Top White Globe' - large, smooth, round root is purple above, white below, very tender when young             with a mild flavour.

Eden Seeds has a range of non-hybrid old traditional open pollinated Turnip seed to buy online in our internet store. 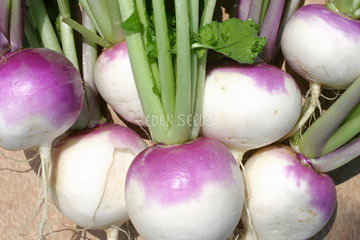 Turnips need a well drained, loamy soil in full sun with a pH of 6.5. Compost and well rotted manure should be dug in when preparing the soil for planting. Don’t plant where their brassica relatives (cabbages, cauliflowers, broccoli) grew last year. Turnips and swedes prefer a colder climate but planted now in our coolest part of the year they should mature before the warmer weather arrives. Plant seeds directly into the soil (they don’t like to be transplanted) about 1cm deep and water in with a pinch of Epsom Salts dissolved in the water. After seedlings emerge thin to 15cm apart and water growing plants regularly to keep soil moist but don’t have soil too wet. Liquid fertilise with compost tea, seaweed solution or similar every couple of weeks, other than this they require very little attention. Turnips will grow quite happily near the onion and peas families. Turnips can be harvested a month to three months after planting while Swedes require an extra month.

The leaves of both plants can be attacked by the cabbage caterpillar, inspect and remove any invaders regularly and the best way to avoid club root disease is to rotate your crops regularly.

The entire turnip is edible the leaves are best eaten when young raw or cooked similar to spinach. The root can be eaten raw when small or cooked. Raw turnip roots can be served with a dip or sliced/grated as part of a salad. Turnips can be cooked pretty much the same way as potato boiled, baked, roasted, mashed, in stews, soups, stir fries or even stuffed. In some European countries the turnip was used as a staple food before the potato arrived. In Lebanon and Asia turnips are often pickled. In Iran, boiled turnip roots (with salt) are a common household remedy for fever.

Some interesting facts from Wikipedia:

·         In Scotland turnips or neeps are mashed and eaten with haggis, traditionally on Burns Night

·         Turnip lanterns are an old tradition; since inaugural Halloween festivals in Ireland and Scotland, turnips (rutabagas) have been carved out and used as candle lanterns

·         The turnip is an old vegetable portrayed in heraldry. It was used by Leonhard von Keutschach, prince-archbishop of Salzburg.

1.         Trim and peel turnips, cook in boiling water with 1½ teas salt and sugar until tender, remove

2.         Scoop out centres of turnips until a thick hollow shell is left

3.         Fry mince with mushrooms and onion in pan until onion is golden, add cheese, salt and pepper, mix well. Remove from heat and mix in egg.

4.         Mash scooped out portion of turnips combine with meat mixture.

1. Choose turnips no larger than your fist. Cut off the tops in a thin layer and peel the turnips, including root. Cut turnips into chunks.

2. Bring the water to a boil in a large pot on the stove, add salt and sugar then the turnips. Boil for about 20 minutes, or until the turnips are tender. Drain well

3. Add butter and milk, mash the turnips until they are smooth. Add salt and pepper to taste.


Share this article
Posted in: BOGI
Tagged with: turnip