This article evolved from a list of seeds from an old BOGI newsletter sent to me by Margaret and an insert in a recent edition of the Courier mail. Without getting technical a seed is the result of a flower having a sexual interaction, either with itself or with another flower of the same family. This seed is part of the developing fruit which when ripe becomes mature and ready to grow into an offspring of the parent plant/s.

The meaning of the word ‘seed’ from Wikipedia is

‘A seed is a small embryonic plant enclosed in a covering called the seed coat, usually with some stored food. It is the product of the ripened ovule of gymnosperm and angiosperm plants which occurs after fertilization and some growth within the parent plant. The formation of the seed completes the process of reproduction in seed plants (started with the development of flowers and pollination), with the embryo developed from the zygote and the seed coat from the integuments of the ovule.’

Seeds vary immensely in size, shape, colour, texture, hardness, some have wings, some prickles, some thin, some fat, some long, some short from the smallest (some epiphytic orchids have seeds which weigh 0.81 micrograms, invisible to the naked eye) to the largest (the coco-de-mer palm (Lodoicea maldivica) can be up to 30 cm long, 0.9 m in circumference and weigh 18 kg). But, their purpose is always the same to carry on their species.

The Courier Mail (Saturday May 14 2011) published a copy of the first daily Courier Mail (Tuesday May 14, 1861) and on this page was an advertisement for seeds as follows. The names of some of these seeds will be familiar some not so, but, think back to  150 years ago, seeds were not readily available, seed saving was essential, many  new Australians brought seeds with them. It has been said that some of our plants are now more pure than those in the countries of origin as there was less chance of cross pollination here in Australia, and didn’t these people have to learn when to plant these European seeds to get the best from their crop and how to deal with insect pests they hadn’t seen before. Following on from this it was interesting to say the least to see the list of the seeds in the BOGI seed bank in 1994 BOGI newsletter. Didn’t the members do well to save all of these seed to share amongst the group and other related groups. I remember Ron Charteris (former BOGI Seeds coordinator) once telling me ‘the seeds were sent to us from Darwin so we called them Darwin Lettuce’ and I am sure many of the seeds got their name in the same way. See the list from 1994 on page 10. BOGI owes a great debt to the early BOGI members and particularly the Charteris family for their dedication in preserving so many varieties of seeds and their distribution among the BOGI group and to other dedicated growers. Have a look at these two lists see which ones are still available, see what has or hasn’t changed.

There are a few categories into which seeds are grouped.

Open Pollinated – these seeds are the heart and soul of seed saving, they are pollinated naturally by insects, birds, wind etc., are usually hardier, have better flavours and will adapt naturally generation by generation to suit the local environment. Many of these are classed as heirloom plants which have been grown since earlier times being handed down by generations of farmers and gardeners and transported around the world as new lands have been settled. Seeds produced by open pollination are usually true to type.

Cross Pollinated – this can be done on purpose or accidentally by nature. It can only occur between varieties of the same species not between different species e.g. a butternut and jap pumpkin can be cross pollinated but not a tomato and capsicum. Cross pollination will not affect this years fruit, flower or vegetable but the seed created by it will be a mixture of both its parents traits and at times can even be sterile.

Hybrid – these plants are created by humans purposely cross pollinating two plants of the same species, often distantly related, which were selected for various desired traits, e.g. larger more colourful flowers, larger fruits etc. Plants grown from seed of hybrids will not grow true to type and are often not viable.

Genetically modified (GM) plants – these plants have had their DNA altered by introducing a trait that does not occur naturally in its    species. Don’t try saving GM seeds.

Dispersal of seeds – in nature plants found many ways to ensure their species survived, by explosion, wind, water, animals, ants - the method is usually determined by the type of seed, sharp barbs, wings, fine hairs, edibility etc. but with human intervention it has led to seeds being transported throughout the world and being grown in places never thought of in earlier times. We do have to be careful we don’t create monsters (pests) as a result of our interference.

Saving & Storing Seed – part of this has been mentioned earlier in this piece but it is so important to do it right so your time is not wasted. To save your own seed choose seeds from strong healthy plants (not the ones that weren’t good enough to eat) and make sure these plants have the traits you most liked in the plant (flavour of fruit, earliness of flowering/producing, size of flower, fruit, vegie, etc.). Let the fruit, vegie, flower mature on the plant before harvesting. Some herbs and flowers can be harvested and hung in a dry place until seeds are ready for collection. Different fruits and vegetables need their seeds removed in various ways, some dried in their pods, some removed, washed and dried, others fermented in their juices before drying but no matter how the seeds are collected and treated they must be dried fully before storage. Drying is best done in the morning or afternoon sun and may take several days, be patient. When seeds are fully dried store them in airtight containers (add a recycled silica pack if possible) then place in a cool dark dry place where the temperature is fairly stable. The greatest enemies of seeds are heat, moisture and fluctuations in temperature. Lastly and most importantly “Label Your Seeds!!!” believe me you will not remember if they are cauliflower or broccoli seeds when you want to plant them in 8 months time. On the label record name of seeds, date of saving and a brief description or relevant notes from the initial planting.

Germination of seeds – there are so many types of seeds, some very similar to each other but some with extreme differences. To germinate successfully seeds often need perfect conditions, the right temperature, the right humidity, the right type of soil, the correct amount of moisture, the correct length of time, the correct amount of light. Sometimes we need to do some research before planting a seed and if one way doesn’t work we have to be prepared to try another. Some need to be exposed to fire, some water, some to the digestive juices of animals, some need to be scarified, isn’t nature wonderful.

Viability – some seeds have a short life span and some long, environmental conditions such as temperature, water, light and air can affect their viability. The older they get the more their viability will deteriorate. If you have seeds you are unsure about a simple test is to place a few seeds between a folded damp sheet of paper towel which is then placed in a sealed plastic bag. Place this in a warm position such as the top of your refrigerator or hot water system (don’t overheat and keep out of drafts). In a couple of weeks most viable seeds will shoot. Following is a list of popular plants and the number of years for which their seeds are usually viable, this is a guide only, and may vary.

The most recent record (June 2005) is the seed of a date palm (Phoenix dactylifera) discovered during an archaeological excavation at King Herod's Palace on Mount Masada near the Dead Sea. This ancient seed has been carbon-dated to be about 2,000 years old. 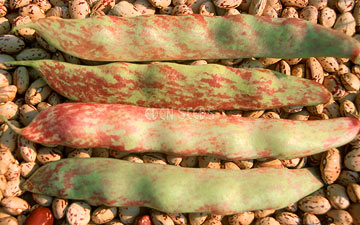 Common, open pollinated, annual plants from which seed may be saved include lettuce, beans, peas, herbs, and tomatoes.

Beans and peas - allow seed pods to turn brown on the plant, harvest pods, dry for one to two weeks, shell, then store as above.

Lettuce seed - harvest seed stalks when fluffy just before seeds are completely dried, place with heads in paper or cloth bags, when seeds come off easily store as above. 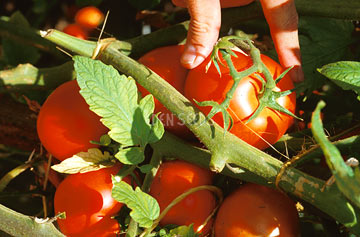 Herb seeds - allow herb seeds to stay on the plants until they are almost completely dry, harvest , hang upside down in a cool dry place with heads in paper or cloth bags, when seeds come off easily store as above

Tomato seeds – Harvest tomatoes when ripe but not over ripe, cut fruit and remove pulp. Place pulp in a container with a little water and allow to ferment for about four days until seeds separate, drain off water and pulp and spread out to dry on a tray or sheet of paper towel, store as above, though a wire mesh enables seeds better to be collected once they are dry.

Did you know? Some seeds stay alive for only a few days and after that they won't sprout at all. Some other seeds need a rest period before they can sprout.

For more information you may wish to purchase The Seed Savers Handbook, or Seed to Seed, or Seed production for the Australian Home Vegetable Gardener online from Eden Seeds.

Share this article
Posted in: BOGI
Tagged with: Seed