Late last year when considering which herb to write about next I looked around my garden to find my ‘French’ Tarragon was getting some news shoots and what looked like a couple of buds. Yes that would be it, ‘French’ Tarragon, a cutting of it had been a gift earlier in the year from an old friend, a childhood neighbour who was rather surprised that I didn’t already have it or miss not having it. Margret had received her ‘French’ Tarragon from a friend also. As soon as my cutting had taken root and started to grow I had started using it with its delicious sweet aniseed flavour, much to the disdain of my hubby who doesn’t relish its flavour. What I thought would be an easy article soon became one that required more research. Many of you no doubt know what I soon discovered but for those of you who don’t, here we go. 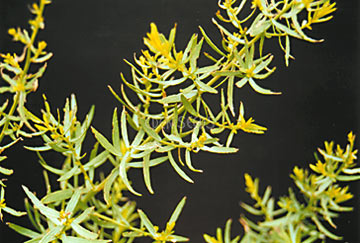 Tagetes lucida, which is native to Mexico and does very well in our climate and not closely related to French and Russian Tarragon.

Mexican Tarragon also known as Sweet Mace, Winter Tarragon, Cloud Plant & Sweet Marigold likes to grow in full sun in soil that has been prepared with lots of organic matter and can be grown from seed, cuttings or root division. The plant will grow to 70cm with green leaves up to 5cm long and about 1cm wide and gets clusters of bright yellow 1cm flowers throughout the warmer months. It is best planted in early spring through to mid summer but will often propagate at most times of the year. It does tend to at least slow down and even die back in winter. Mexican Tarragon can be used in any recipe that asks for French Tarragon but use less of it as its leaves have a stronger aniseed flavour than the French Tarragon. The Aztecs dedicated it to Tlaloc, the god of rain and lightning who was responsible for the ‘water’ illnesses of gout, cold, oedema and rheumatism. It is said to help treat headaches and colds.

Although French and Russian Tarragon are members of the same family probably native to Siberia they have some important differences.

French Tarragon (Artemesia dracunculus) (from the French term esdragon, meaning "little dragon”) which is also known as ‘true tarragon’ is almost weedlike in appearance. It will grow to between 30 and 90cm tall with long narrow smooth-edged leaves (5 – 10cm long) and produces insignificant tiny white to green flowers which often don’t open and are sterile i.e. they don’t produce viable seed. They are propagated from cuttings or root division. Tarragon grows best in well drained soil and full sun, don’t over fertilise or water as this will decrease its flavour. French Tarragon has a superior flavour to the Russian, sweeter and lighter. It is called 'the king of all culinary herbs'. Its fine, light aniseed flavour combines beautifully with chicken and fish dishes, sauces (Bearnaise, Hollandaise), salad dressings, vegetables, flavoured butters, soup and classic French cooking. It is used to flavour vinegar or olive oil used for salad dressings. It is said by adding French Tarragon to a plain chicken salad it becomes fit for a king.

Russian Tarragon (Artemesia dracunculoides) also known as ‘false tarragon’ has narrower and spikier leaves than the French variety, it can grow taller, seeds prolifically and can become a weed. When young its flavour is not as sweet as the French with a bitter undertone and as it matures it becomes almost tasteless. Russian Tarragon is often better described as a tonic.

Both the French and Russian varieties are high in Vitamins A and C, and are used in homeopathic remedies. It is believed that tarragon is useful for stimulating the appetite and as tonics, it was also once used for toothache.

But it is difficult to tell the two apart. The best way is to do the taste test, take a leaf, chew it well and wait for the numbing effect in your mouth, that signifies it is French Tarragon (Mexican tarragon can have a slight numbing effect).

All forms of ‘tarragon’ are perennials and become dormant in winter, even dying down in frost prone areas, protect them from the cold with a loose covering of mulch. When harvesting pinch out the tips as this will make the plants bush more.

To make a simple herb vinegar fill a 2 litre glass bottle with about 2 cups of bruised tarragon leaves, cover with wine vinegar and leave for 2 - 3 weeks. Strain into glass bottles and add a flowering sprig of Mexican Tarragon or a leafy sprig of French Tarragon for decoration.


Share this article
Posted in: BOGI
Tagged with: Tarragon