Over the years I’ve grown most varieties of brassicas but one I haven’t tried growing is Kohl rabi, so as part of my endeavour to grow a couple of different vegetables each year I’m going to give Kohlrabi a go. If you have never tried eating Kohl rabi it has a subtle but delicious flavour and is somewhat similar to a cabbage core/stalk or even a broccoli stem and has the texture of a potato. 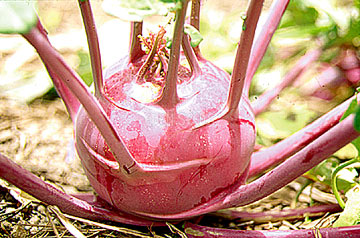 Kohl rabi - Brassica oleracea var gongylodes, is a member of the brassica family and closely related to cabbages, broccoli, cauliflower, kale, etc. They all came from a common parent the ‘wild cabbage’. Until 400 – 500 years ago it was unheard of. It was first recorded in cultivation in Northern Europe in the 14th century and by the end of the 16th century it was known in Germany, England, Italy, Spain, Tripoli, and the eastern Mediterranean and records show it was being cultivated in Ireland in 1734, in England in 1837 and in the United States in 1806. Its name Kohlrabi is a German word derived from "Kohl" which means cabbage and "Rabi" which means turnip.

It is not a root vegetable, the bulb is actually the stem just above soil level which swells into a quite delicious vegetable. There are white/green and purple varieties of this very hardy vegetable. It is very popular in Europe but almost unknown in many parts of Australia. It will grow throughout the year in some parts of Australia but prefers the cooler months of the year in South-east Queensland.

Kohl rabi can be grown in garden beds or containers. It does best in full sun, but will take some shade, with well drained fertile soil with a pH between 6.0 and 7.5. Soil should be prepared with lots of compost and manure and some lime or dolomite. As with all brassicas they are heavy feeders so to develop good bulbs make sure that the soil is very rich with fertilisers when prepared. The soil does not need to be deep as the kohl rabi is not a deep rooted plant and it likes to be well watered. Seeds are best planted directly into the garden bed or container where they will grow but if necessary can be raised in seed trays and transplanted at about 5 weeks. Kohlrabi seeds are fairly small so plant less than 1 cm deep. As seedlings grow thin to about 15cm apart, the thinnings can be eaten in salads or stir fries. Stagger your plantings of Kohl rabi to allow for continual harvesting over the cooler months of the year.

Green, white, and purple skinned varieties exist, the "white," actually being light green, is much more popular although the purple variety is most attractive. In Europe there are even some fancy kinds with frilled and deeply cut leaves which are sometimes grown ornamentally. They are all white inside.

The most popular Kohlrabi open pollinated varieties available to purchase online from Eden Seeds are:

"Purple Vienna", which has rich purple stem and bulb with a light green to white flesh

“White Vienna”, which has a white/pale stem and bulb with white flesh

Always water them in dry weather to prevent the bulb and stems becoming woody, keep the weeds away from them and mulch well to retain moisture in the soil. During their growing period they will benefit from regular applications of liquid fertilisers.

Kohl rabi grows fairly quickly, usually harvesting can start within 10 weeks of planting or from when the bulbs are about 3cm across. Continue picking as required up to about 12cm across before they get too large and fibrous. To harvest cut with secateurs or with a serrated knife just above ground level. The leaves and their stalks can be harvested as required for use in salads or stir fries the same as spinach or prepare and use as you would cabbage, even as a coleslaw. Kohlrabi loses flavour if stored for too long, store in the refrigerator for up to 10 days but it is best used as fresh as possible. To freeze for later use cut into pieces, blanch for 3 minutes, drain and chill in iced water, drain, dry and spread in a single layer on a tray, freeze for 30 minutes then pack into freezer bags, remove air, seal and freeze. It will keep frozen for up to six months. The bulbs can be baked, boiled, steamed, fried or used raw.

Kohl rabi is attacked by the same pests as it’s brassica family cousins especially the cabbage moth, if you don’t intend using the leaves, this won’t be a problem. If you want to keep some seeds firstly, it has to be kept separate from other brassica family secondly, Kohlrabi is a biennial which means it germinates and grows in its first year but doesn’t produce its flowers and seeds until its second year, after which it usually dies. Kohlrabi can be grown through our summer months but will be susceptible to root rot.

Don’t let this be one of those vegetables that arrive in your box of mixed vegetables and sits unused in the corner of the fridge until it slowly deteriorates.

Spread on baking paper in oven tray, cook until tender and golden

Drain & cool then cut off top and scoop out centre leaving a thick hollow shell.

In a pan fry mince, mushrooms and onions until golden, add cheese, salt and pepper, mix well, remove from heat and blend in egg.

Mash scooped out centre and then combine with mince mixture.

Place on baking sheet in shallow tray in oven.

Add carrot and stock, bring to boil and simmer for about an hour.

Remove from heat and puree vegetables, mix back into stock add salt and pepper to taste. Serve with a little sour cream if desired.


Share this article
Posted in: BOGI
Tagged with: Kohl Rabi
Back to top