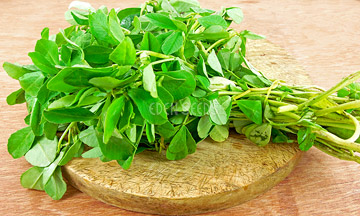 legume and closely related to many varieties of beans and peas. It is an annual which originated in the Middle East and Mediterranean, some seeds have been found in Iraq which date back thousands of years, others were found in the tomb of Tutankhamen. It is one of the oldest medicinal herbs.

Fenugreek grows about 60cm tall, produces white to cream pea like flowers which mature into pods of seeds, 10 - 20cm long with 10 - 20 seeds. It can be used as a herb, spice, vegetable, animal fodder and green manure crop.

To grow it in the garden prepare soil with lots of compost, it likes a rich, slightly acid soil, pH 6.0 – 7.0, which is well drained and in full sun. It will tolerate dry weather but prefers the occasional watering. Plant seeds directly into the garden bed from spring through to autumn, not too deep and to speed up germination seeds can be soaked in water overnight before planting.

If growing as a green manure crop, dig plants in when about 30cm tall, before flowering. Fenugreek adds organic matter to the soil and restores nitrogen.

Fenugreek seeds have been used as a spice and fenugreek leaves eaten as vegetable in India, China and the Middle East for centuries.

You can purchase small or large quantities of Fenugreek seed online from Eden Seeds and Select Organic.

When growing for harvesting leaves pick leaves when young (hot weather will make them bitter). They can be grown in pots or trays especially when growing only for their leaves or as micro greens. They are very popular as sprouts. Leaves can be used in salads, sandwiches, stir fries, soups and stews. Sprouts can be eaten as a snack, in salads, sandwiches and stir fries or as a garnish. Leaves can also be used dried.

For seeds pick pods when they go yellow, place in a sunny spot until dry, remove seeds from pods and store in a sealed container until required. Seeds are used plain or roasted to season curries, pickles, imitation maple syrup and tea. The seeds are quite hard and are best crushed with a mortar and pestle.

Fenugreek plants can be fed to animals as both a tonic and a food source but can be harmful if too much is eaten.

It has been used as a dye, to season pipe tobacco, in cosmetics and perfumes. Its most traditional use was medicinal.

In traditional Chinese and Indian medicine Fenugreek seeds have been used to treat cholesterol, poor circulation, lung problems, sore throats, head colds, stomach ulcers, bowel and kidney problems, tuberculosis, as an anti-inflammatory, to increase milk supply for women who are breast feeding, to cleanse the blood and as a tonic.

To make your own fenugreek sprouts you will need a clean jar, a piece of cheesecloth or similar, rubber band and a tablespoon of seeds.

·  Place seeds in the jar, half fill with lukewarm water, cover jar with cloth, fasten down with rubber band and soak for 12   hours

·  Drain through cover, refill, rinse seeds and drain out, stand jar on angle in a cool spot so it will drain

·  Follow this rinsing procedure every 12 hours until sprouts are ready to use, ( a few days) up to 4cm long

·  Sprouts can be stored in the refrigerator


Share this article
Posted in: BOGI
Tagged with: Fenugreek